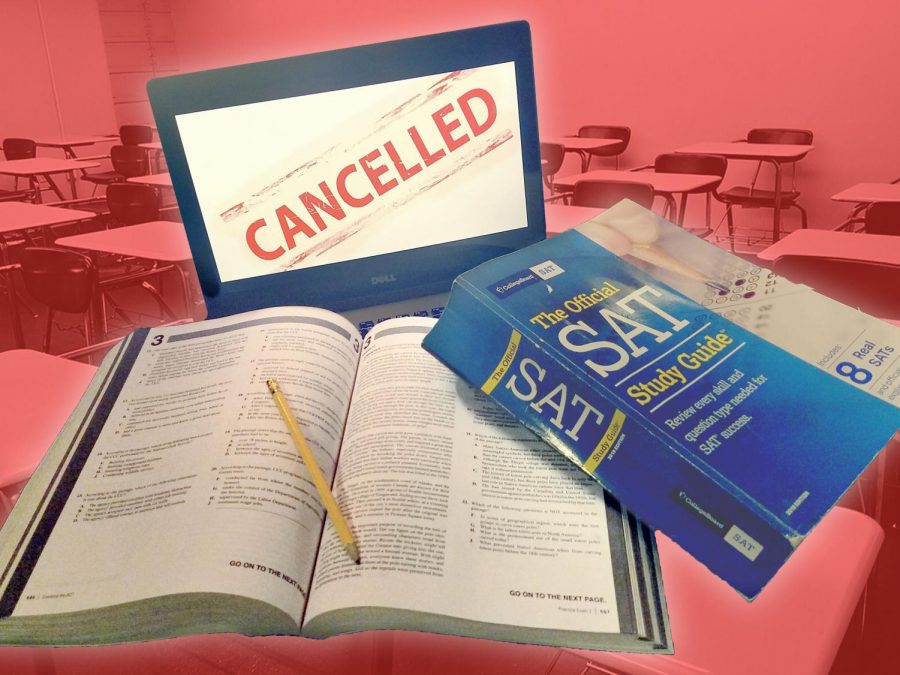 The end of the school year is usually a busy time for any student. However, this year, the coronavirus has caused disruptions to social gatherings, not the least of which is standardized testing. Whether AP, IB, SAT, ACT, FSA, or EOC testing, there is no test nor student that has not been affected by the outbreak of the pandemic in the United States.

For students taking Advanced Placement (AP) courses, the final test is usually three hours long and consists of a multiple-choice test, several short-answer questions (SAQs), a free-response question (FRQ), and a discussion-based question (DBQ). However, this year AP will be requiring students to take only one or two 45 minute FRQ/DBQs online.

This means students will be allowed to use their notes on the exam. “Like a college exam, these exams will be open book/open note. They won’t test simple factual recall; instead, they’ll be focused on skills and thematic understandings,” said Trevor Packer, vice president of College Board and head of the AP Program, in a tweet.

Junior Sydney Driskell is enrolled in AP European History at Cape High and voiced her concerns. “The new AP test formatting is really disappointing. It’s like they’re testing everything we know of a course in 45 minutes. I would rather have taken the full test (or at least a longer test) from home rather than what feels like a short quiz,” she said.

In light of the situation, AP will not be including later chapter material in their final AP exams, so students and teachers will only need to focus on review of previously learned material. Scoring will remain the same on a 1-5 scale.

For the first time since its founding in 1968, International Baccalaureate testing is not set to go on this school year. Usually, there is a series of Paper I, II, and III exams that vary between courses. This year, scores will be determined based on coursework marks, predicted grades, and subject grades the student has already received.

However, as current IB seniors have no final test to study for, their focus on academics may dwindle. Senior Kierra Korpolinski, who is in the IB program, believes this may prove to be an issue later on. “Even if I receive the credits for the classes I’m taking, because of the online learning and the lack of pressure to learn the content, I feel I will need to retake these classes in college,” she said.

This form of grading suggests a heavy reliance on the student’s Internal Assessment and the teacher’s score prediction to determine the final score. “I trust that IB will give fair scores to students, but I know students will probably wonder what their scores would be had they sat for the exams,” said Katelyn Uhler, the IB Coordinator at Cape High.

The extended spring break is causing concerns for IB juniors as well, as they are not receiving the same quantity or quality of information for their IB classes. “Teachers are now expecting us to learn the content from home with little to no lecture,” said Driskell, who is also in the IB program. “I really think I’m gonna test poorly in what we’re learning from home because of the lack of structure.”

Another concern for IB juniors is the disruption in many of their CAS projects. “They cannot do their CAS as they may have intended due to social distancing recommendations. We are telling them to be creative about CAS plans they can do from home,” Uhler said.

For juniors, this is generally the time of year to take college preparation tests such as the SAT and ACT. Meanwhile, seniors are given the opportunity until June 30th to reach a high enough score on either test to qualify for the Bright Futures scholarship.

However, the March 25, May 2, and the June 6 SAT testing days have been canceled, and the next available SAT date will be on August 29. It is uncertain whether the June and July ACT testing days will follow suit.

“Of course, it was really important that the ACT and SAT cancel some testing dates given the situation with coronavirus, but regardless, I’m really disappointed that I won’t have as many opportunities to test,” Driskell said.

Even if the testing day in June goes ahead, issues may arise due to the high demand. “The June exam will most likely be very full, and hopefully testing centers can accommodate for increased numbers of students needing to test before the end of the school year,” Uhler said.

The Florida Department of Education stated that all remaining state-wide assessments will be canceled for the 2019-2020 school year, including Florida Standard Assessments (FSA) and End-of-Course (EOC) Assessments. Current senior students will be exempt from these exams as graduation requirements.

“It is my current understanding that other students (not seniors) will be taking these exams next school year and will still be required to meet all of the traditional graduation requirements,” Uhler said.

As for students’ semester grades, they will be based on the quarter grades and will not include a final exam or an FSA/EOC.