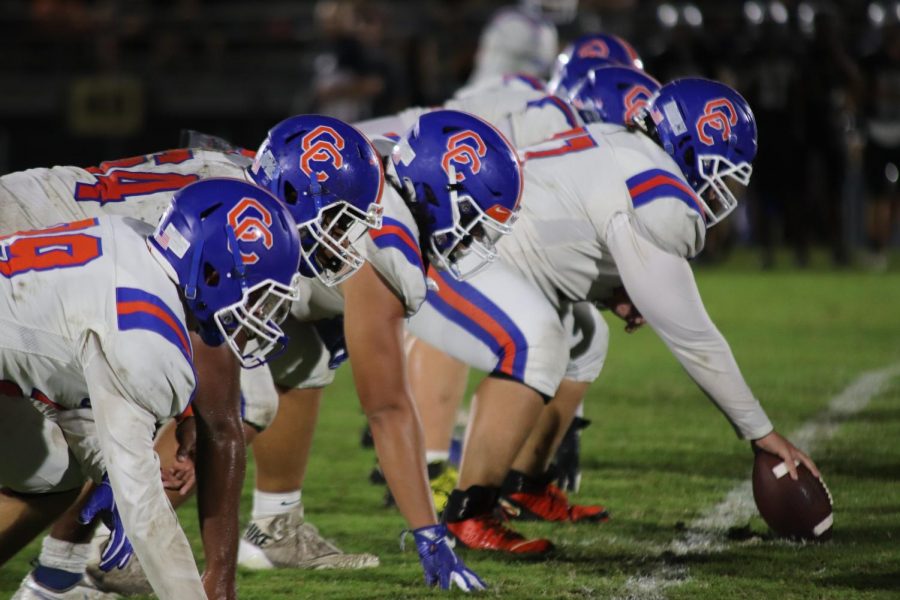 On Friday, November 5th, the Cape Coral Seahawks came back in a thrilling win to beat the Mariner Tritons in overtime, 27-21, to end their football season.

The football game did not start off well for Cape, as Mariner scored two touchdowns early on. “We moved the ball the whole game on offense, but we had three, what I call, ‘drive killers,” said Cape High varsity head coach Barron Bowman. “We fumbled three snaps, could not execute plays, and had some penalties. It was not about what they were doing, it was about us.”

“I felt good at halftime that if we could just quit making those mistakes, that we have a chance to come back.  Fortunately, we were able to do that,” said Bowman.

After halftime, Mariner scored again to make it 21-7, and Cape had to respond fast. “We have a man named Darryl Owens, who threw a dime to Matthew Lundsted, and that got our momentum going, and then from there they were on the backfoot and we just kept going,” said sophomore Judd Cole.

Even with being down by two scores at one point, the Seahawks kept their spirits high. “We had to keep our heads up and you can’t get down on big plays, you have to come back and make plays of your own,” said sophomore starting quarterback Jack Janeway,

The fans that came to the game brought an amazing energy that did not go unnoticed. “The fans were awesome. I heard them, which is always good, the kids heard them, felt them, and that’s even more important than me hearing them. It’s always nice, and any time you’re supported and you feel that backing from the fans in the stands it means the world to the kids, so it was great to see,” said Bowman.

The fan turnout was especially appreciated by the players. “It was a good energy, you like to have people here making noise to make the other team rocky,” said Janeway.

The game went into overtime, and Cape finished it off with a touchdown, winning with a final score of 27-21. “It was a great team win with me and my friends, and it was such a good game with lots of sportsmanship,” said senior Vincent Classetti.

This was the last game for many of the seniors. “It felt great, I wanted the seniors to go off on a good note. It meant a lot to them, and I had to make sure we did not end on a loss,” said Janeway.

This was the last football game of the season and it was the perfect way to finish it,

“Well we won, so it went good, I’m proud of the kids. We played from behind the whole game. We were able to tie it up late in the game and then finish it off in overtime. The kids were playing hard, the coaches kept coaching. I’m really proud of everybody,” said Bowman.