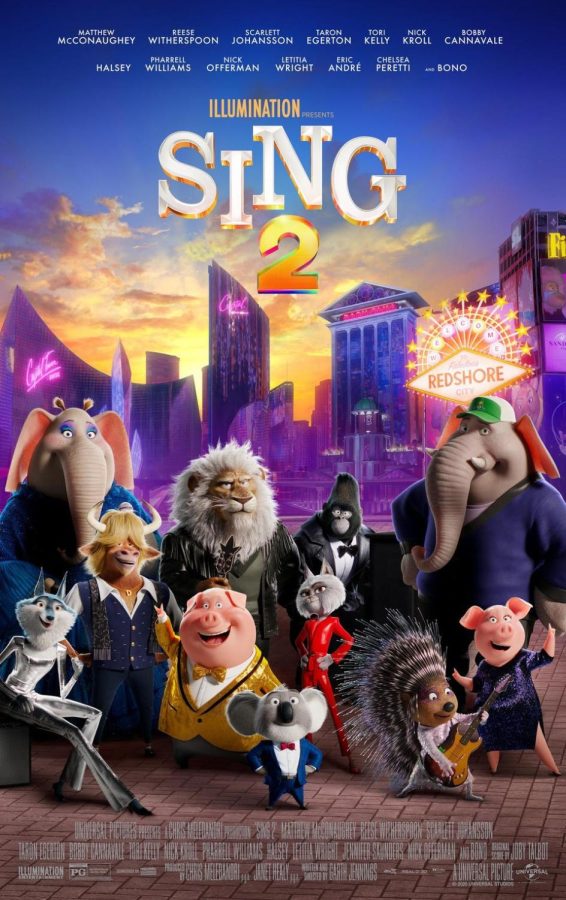 For a sequel that most didn’t deem necessary, Sing 2 surpassed expectations in many areas. From the character growth to the musical soundtrack of the film, it’s surprising that this children’s film has succeeded in places where a lot of adult musicals do not.

Sing 2 brings back the beloved characters from the first film including Buster Moon, Rosita, Ash, Meena, Gunter, and Johnny, taking them on an adventure to theater audition in Redshore City, the biggest theater city in this fictional world.

Trouble ensues, however, once the main character, Buster Moon, lies about a relationship he has with a superstar in order to secure a theatrical show with the biggest corporation in the world.

Directed by Garth Jennings, Sing 2 provided enough of a surprise to not repeat the plotline of the first film. Although still a children’s film, cinematic aspects helped create an environment captivating enough for an older audience.

With major stars voicing this film, it is no surprise that the movie flowed nicely from one character to another.

Actor Matthew McConaughey, who voices Buster Moon, did an average job at conveying the emotions and energy that Moon was known for in the first film. The more intense scenes were executed nicely, however, the eccentric koala seemed a little flat in moments where he should have stood out.

Ash, voiced by Scarlett Johansson, grew the most throughout this film. Her relationship with Clay Calloway (voiced by BONO), conveys one of the most understanding and compassionate characters to be put into a children’s movie. Considering how often Hollywood animation tries to make a character like that a reality, the successful nature of it in this film is one of the most memorable pieces of the entire musical.

Besides the decent quality characters and voice acting skills of some notable actors, the soundtrack of this movie isn’t anything to skip over either. The performance by U2 at the end of the movie was spectacular, and their original song was a nice way to incorporate an older band into a “newer” generation’s movie.

Fans of the infamous Irish rock band could watch the movie only for the soundtrack and not be disappointed.

The only other downfall of this film was that it felt cliché. The musical had predictable moments, and didn’t have any exciting or memorable scenes. It was a quick, entertaining film, and while that may have been what some people wanted, it wouldn’t have hurt to try to see Universal Studios take a new turn with the movie.

Overall, Sing 2 was a decent sequel with great character growth, however, the plotline fell flat with its predictable moments and cliché Universal Studios feel. The movie could have benefitted from a more complex and less predictable plotline, along with better voicing performances by some well-known actors. That being said, the musical wasn’t a bad movie. It’ll entertain the majority of those who watch it and the performances by BONO are enough on their own to encourage fans to watch the film.