Coach More does the most 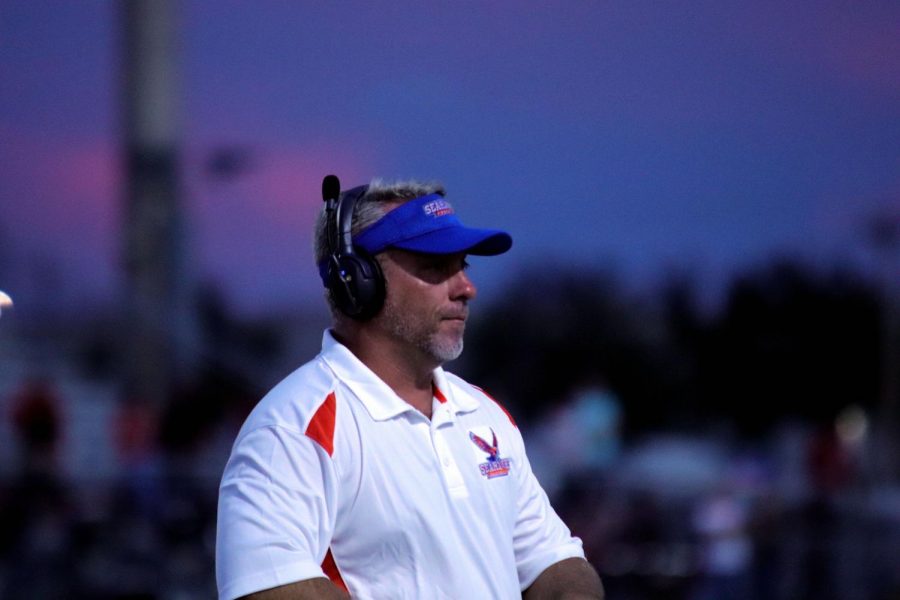 Coach More stands tall every game as he watches the team play.

As soon as he picked up a football, he never looked back. “I was introduced to the sport of football by my dad, and I started playing football in 7th grade,” said More. “I played wide receiver at Cypress Lake High School.”

When one becomes passionate for a sport at a young age, they usually strive to become a professional. However, More already knew that the chances of him going pro were slim. “I always thought I was gonna go pro, but there are not too many 5’6 wide receivers in the NFL,” More said.

After all those years of playing football, his greatest memory of the sport came in his junior year in high school. “My junior year, we were losing the game, so we faked a field goal, and I threw a touchdown to win the game,” stated More.

Due to his experience as a football player in high school, More is able to relate to his players. For instance, sophomore Brady Biolchini has learned things from him as a player both on and off the field.“He has taught me how to be a better man, and he has taught me a lot of techniques in football,” said Biolchini.

Back in the day, More had a tight schedule due to school and work, but he loved football so much that he always found a way to make it work. “I would go from school to football practice. Then I would run to my job, change clothes in the bathroom, work until about ten, do my homework until about midnight, and do it over the next day,” remarked More.

More put in lots of time into school, work, and football, which limited the time available to do other casual teen activities. “I lost free time with friends and things like that, but it has obviously been a great benefit to me in my life,” claimed More.

Young athletes usually have an idol or a certain player that they look up to and want to be like. More confirmed that his inspiration was actually one of his former schoolmates. “There was a kid; his name was ‘Bubba’ Scruggs, and he died my sophomore year. I really idolized him, he was such a great player, really smart, and had great grades. He was one of the most popular kids on campus,” said More.

More really looked up to ‘Bubba’ Scruggs, which is why he still honors him today in his own way. “He wore the number two jersey, which is why I usually give number two to a kid that resembles that work ethic. It is such a special number to me because of Bubba,” said More.

More is currently in his 18th year as a football coach. “I started coaching back in 2001, and I first was a freshman coach for the Cypress Creek Bears in Orlando,” said More.

What he enjoys most about coaching is mentoring the kids. “Being a mentor and helping kids find success, being there for them, and helping to guide them and teaching them character, ethics, and morals are the most important part about coaching for me,” said More.

The school’s football players also see More as a mentor and feel that he is different from their past coaches. Cape High’s new quarterback Isaiah Graham feels that More is mentoring and making him into a better player. “He pushes me, he makes me work
harder than I have before, he also makes me a better leader and teammate,” stated Graham.

Graham believes that More has certain qualities that make him stand out from his other coaches. “What stands out about him is that he always cares about your personal life and your future outside of football, which is a great thing to have from a coach, somewhat a role model,” said Graham.

More has had a different trajectory than other high school football coaches. For instance, he did not play college football, coach college football, or play in the NFL. “I started out as a freshman coach and built my way up to become a head coach for the third time,” confirmed More.

Even though More took a different path to becoming a high school football coach, he still has had quite a career as a football coach. More and his team are looking forward to a great season this year.