Creativity and justice threatened by proposal 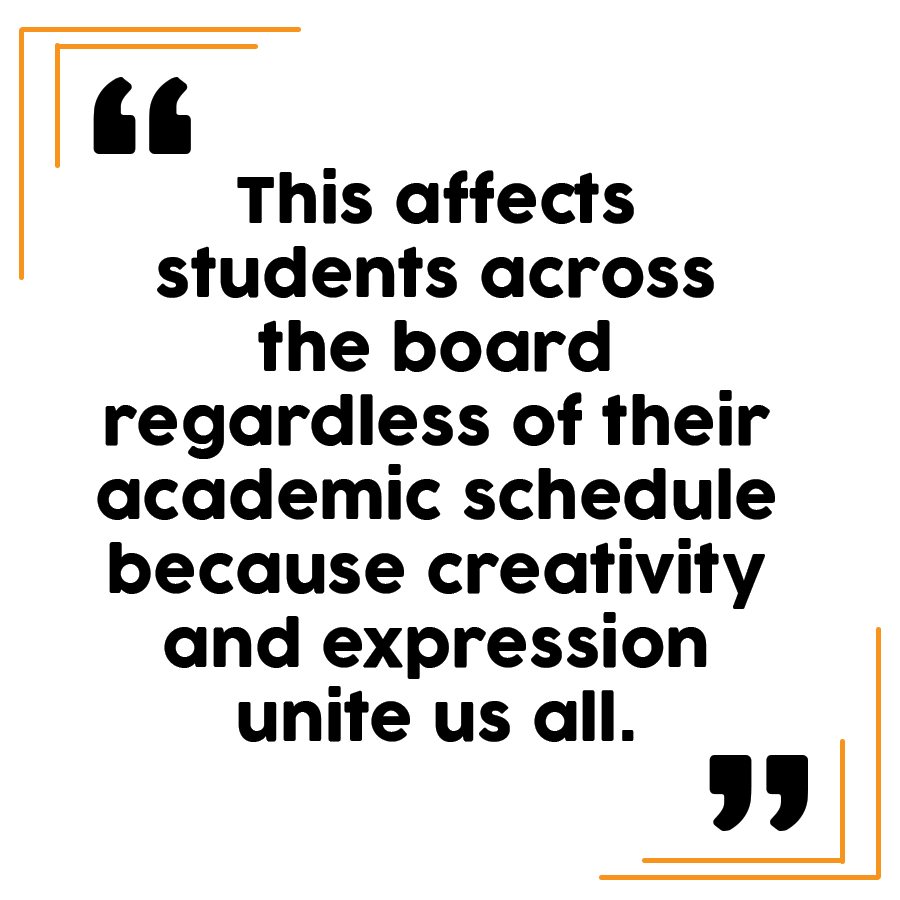 High Schools in the School District of Lee County are currently discussing a change to a seven period day, which would require a complete overhaul of scheduling in high schools across the county.

However, the current block schedule being used is most conducive to the academic and extracurricular achievement of the students at Cape Coral High School, and therefore The Seahawks Eye does not support any transition to a seven period day. We encourage students, teachers, parents, and all other concerned persons to seek action against this change.

The proposed switch to a seven period day would rob every high school student of one of their classes, with the first ones on the chopping block being their electives. This is not a minuscule loss and it cannot be mistaken for one. Electives are students’ one real chance during the school day to explore beyond the traditional and required curriculum.

For students in programs like the International Baccalaureate Program, which requires seven academic classes, this modification would rid them of their only elective period. It would in turn also be ridding them of their only breath of relief from their rigorous workload and potentially be cutting them off from something they love.

IB students at Cape High are encouraged to commit themselves to their elective and take a course that holds a lot of value to them. Therefore there is high IB involvement in extracurricular programs, including band, choir, and even this newspaper. It is foreseeable then that if this schedule shift were to occur, it would result in the loss or extreme weakening of these courses, which the schools pride themselves highly upon.

High school is about more than just common core classes, it provides teenagers with the ability to discover their passions, learn valuable trade skills, and begin to form an idea of what they will do beyond the walls of Cape High. Not everyone is meant to go to college or to work in jobs that require intense formal schooling, that is why the trade programs at this school are of such high importance.

There is an incomprehensible amount of value in every single elective class, and it is imperative that administrators are aware of this as they make their decisions. This affects students across the board regardless of their academic schedule because creativity and expression unite us all. In the past, people have had to fight for the arts to be prioritized in schools, and this new proposal appears to be a giant step backward.

It is also important to note how unfair this would be to teachers, who already feel they are being neglected by the school district. The time in which they are teaching would be extended an additional 30 minutes which would cut into their after hours time, during which they can meet with students, do makeup tests, and sponsor club meetings. They would also be losing a substantial amount of planning time which would result in them having to take even more assignments home to grade.

It could even be assumed that since there will be one less class period, meaning less student involvement in electives, there will also be less of a need for the current number of teaching staff. Schools could be forced to let go of a considerable amount of teachers who have done nothing to provoke their removal.

Teachers would be subject to all of that additional stress, and for no extra pay. Their salaries would remain the same despite a sharp increase in their workload. It is rather disheartening to see just how little this plan has taken teachers into account.

It is not even just current teachers that this plan would have serious implications for. If administrators have to cut teachers that are already established within their respective schools, they will not be looking to hire any new, young teachers coming out of college. This could drastically impact the quality of teaching in future years if schools are unable to hire fresh minds to keep up with the changing times.

The argument being made is that the top districts in the state have more student-to-teacher time and in order to increase our ranking we must follow suit. The district believes that with the time extension a seven period day becomes feasible, and because it fosters more frequent teacher interaction it is the better option. However just because there is a new surplus of time, does not mean the district needs to alter the way in which it is used. The top 2 districts, Miami-Dade and Broward, both utilize block scheduling and there is frankly not enough reasoning for this county to differ.

It seems rather apparent that the costs that come with this proposal far outweigh any benefits. While it may be beneficial for some students to see specific teachers more frequently in particular subjects, the same thing can be said in favor of block scheduling for classes that require more time to conduct labs or lengthy testing. Given that these two matters cancel out, the loss of an elective and lack of teacher pay should far outweigh any other concerns.

This is unfair. It is not as small a change as the district will label it off to be. This will have major repercussions for both students and teachers alike and the district has not even been considerate enough to communicate this proposition to the community properly.

At the end of the day, the School District of Lee County is supposed to do what is best for the students, not the bottom line. They should not be allowed to make this choice without hearing each and every one of our voices; we must remind them who they truly work for. This proposal is already in motion, and will not stop unless we fight back.

It is essential that we establish a presence at school board meetings, and would like to see every seat filled at the upcoming March meetings (see @seahawkseye Instagram for more information.) This campaign, though, must extend beyond weekly meetings and into the inboxes and mailboxes of the school board executives. If students care enough to take time out of their lives to write a letter documenting their beliefs the school district will be forced to take note.

The final crucial facet in getting the district to genuinely hear our concerns out is parent involvement. The school district cannot brush off irate parents as easily as they will try to do with students.

The band heard playing at football games, the art seen decorating the halls, even the very words on this page are all the result of passionate students using their gifts for more than just state testing data. We deserve the opportunity to express our talents beyond the rigidity of a standard classroom, and the recognition that true brilliance can be found outside of just the math wing.