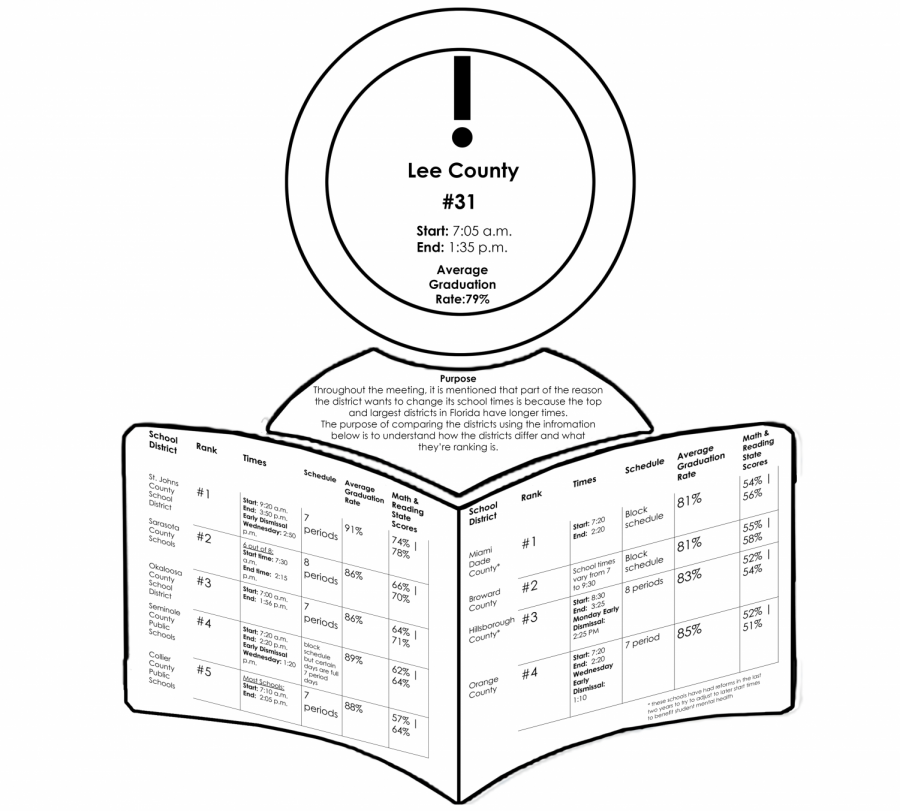 On February 11th, 2020, a school board meeting was held in the Lee County Public Education Center. Towards the end of this meeting, Superintendent Gregory K. Adkins was making his usual comments when an incendiary proposal was introduced.

News of the proposal spread to all the varying levels of education, including students at Cape Coral High School, sparking anxious whispers and confusion throughout the school.

The proposed plan holds two separate components. The first being to increase the student school day from six hours and thirty minutes to seven hours. The second idea is to change the current block schedule to a seven period day.

“The thought process is if you look at some of the larger districts in the state, so you look at the 10 largest districts and also the ones like Collier and Charlotte that are around here, and especially the ones who have performed like A districts, right now we’re a B district, the shortest amount of time that they have in the student day is six hours and 55 minutes where we’re six hours and 30 minutes,” Cape High Principal Christian Engelhart said.

“The rationale on the additional 30 minutes is it’s not really an even playing field right now, our students aren’t getting as much instructional times as other kids that they are being compared to around the state.”

According to Adkins, after this issue of a time disadvantage was identified, the team began working on solutions. “The number one thing, I believe right now, that is limiting us is the amount of time that our teachers are standing in front of students so instructional time,” Adkins said.

“The team has identified that as an issue and that is why the academic services team along with the work and operations is working on a plan to address that for the following year because I think that’s going to be one of the things that are going to be a major step that I think is going to probably give you a huge bump when we’re able to implement that.”

Along with instructional time, another area that they believe needs improvement is how students spend their time during school. It is believed that the 7 period schedule will help to eliminate filling a schedule with electives for the sake of spending time. “I truly believe that we can make gains by making sure that by the senior year we’re not just loading up with junk in the last schedule and what I say by junk, ‘I’ve got all my stuff done and so I’m taking electives.’ This is something I feel pretty passionately about and I think this year they’re really addressing that so that we have academics infused through all of those four years including that last year,” Adkins said.

The plan is currently in its early stages, teachers at Cape High were officially informed about the possibility of these changes on February 26th.

“I want teachers to be able to have good discussions. We have 85 teachers, in a 30 minute faculty meeting, it’s hard to have enough quality discussion so what we’re going to do is I’ve met with our instructional leadership team and shared all this information with them and so then they’re going to take it back to their PLCs tomorrow after school. Each group so like English will meet together, science will meet together, and I asked them to come up with their pros and their cons, their feedback, and what their preferences are for a schedule. They’re going to give that to me and then my responsibility will be to share our schools in our next principal meeting in March,” Engelhart said.

As of now, no changes are official. The school board still needs to process and discuss the information before making a decision. “I will not be entertaining any motion to change policy without all the information,” District 5 Board Member Gwynetta S. Gittens said.

During March is when most of the meetings discussing this proposal will occur, it is likely that they will also come to a decision during one of these meetings. “There’s a good chance that a decision will be made because, by the end of March, we’re really in the process of planning for the next school year. We probably need to know sometime by the end of March and then maybe April at the latest,” said Engelhart.

While the changes are being discussed now, their impact will truly be felt next school year. The seven period schedule would mean all students lose an elective and for some students such as International Baccalaureate (IB) students, this would be their only elective. “I think it’s unfair to all those in programs and electives that are genuinely useful for students, especially for those in the IB program, they wouldn’t be able to be in Band, yearbook, newspaper, pharmacy, SAT/ ACT prep, and many other programs that involve students within the school and the overall roundness of students school life,” IB junior Nicole Chang said.

Other effects of the schedule changes include a longer transition time from class to class, less student-teacher time after school and less planning time for teachers. “Students would be changing classes so often, I feel like there’s a big waste of time there in the day and it’s hard to change that often and get settled in for class,” IB English teacher Kelly Seaton said.

“What we would lose is that 30 minutes that we have of contract hours after you guys leave. It’s going to cut into time that I can help students with the EE [extended essay] process or any writing trouble that they’re having. I can’t imagine really going through your essays and giving you decent feedback or anything without any planning time.”

These effects would not be specific to Cape High seeing as the changes will occur throughout the district. Students at Fort Myers High school (FMHS), another school that offers IB, are concerned by the possibility of schedule changes. “The schedule change proposed by the district only focused on bettering a small population of the student body rather than how it will affect the entirety of the student body. Changing our schedule from an eight class schedule to a seven class schedule will take away the only elective period that IB students have,” FMHS IB junior Dylan Howington said.

“The district’s aim is to help the lower functioning students bring up their test grades by having every class, every day. However, the district fails to realize how this will have a myriad of negative outcomes on the students who are focused on their schooling.”

While there may be some negatives to the proposed plan, there may also be positives. Being able to interact with a teacher every day would be beneficial to a student’s cognitive processes.

The new plan would also be beneficial in terms of absent students who would currently go days without seeing a teacher if absent one school day. “I personally think in terms of teaching, it’s better to see the kids every day. It’s better to have some continuity and to not have to sit here for an hour and a half, you guys get bored at 90 minutes. It’s difficult to focus on something for that long, particularly for freshmen,” AP World History teacher Daniel Gross.

“It’s very difficult to sit in an advanced class for an hour and a half. I also don’t like block scheduling that if you have class on a Friday and you’re absent Tuesday, you don’t see that kid again, all the way to Thursday so then it’s a week of instruction because they missed one day. So I personally like the seven better, but I don’t like that there won’t be enough electives.”