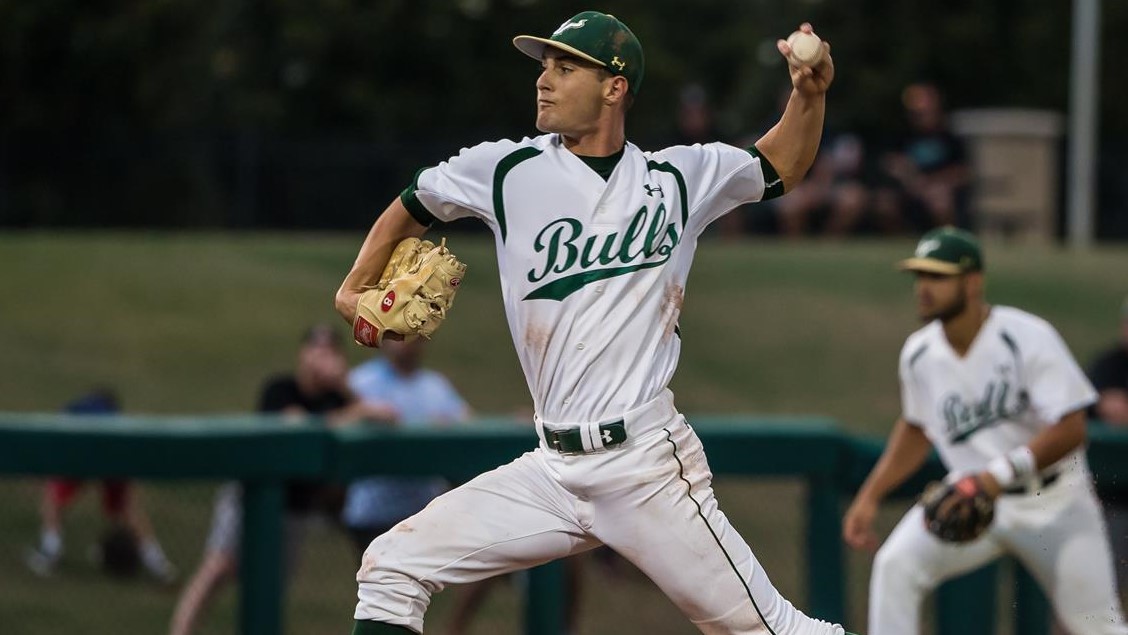 Shane McClanahan pictured in one of many successful games during his time with the University of South Florida. (gousfbulls.com)

Shane McClanahan pictured in one of many successful games during his time with the University of South Florida.

As Shane McClanahan stepped out onto the field deep into the San Diego night, it was quite far from what he had daydreamed about as a child. The “roaring fans” were cardboard cutouts, weathered from months facing all the oppressive heat Southern California has to offer. Artificial crowd noise was pumped in to fill in the otherwise eerie silence.

At least his family was still cheering him on, only from the couch, rather than the stands where they would typically find themselves. It might have been unorthodox, but the Cape Coral High School graduate had finally made it to the show, and wasn’t going to let the circumstances of 2020 bog down this once-in-a-lifetime opportunity.

It wasn’t the most elegant start to a career one has ever seen. On his first pitch, the runner on first base took off, taking advantage of the rookie’s jitters and stealing second with ease. Just a few pitches later, the ball was popped up over his head, and he collided with his teammate, tumbling to the ground as he watched the batter reach safely.

Him crashing down onto the turf was nearly the polar opposite of his career trajectory, as he journeyed all the way from CCHS to the University of South Florida to the Tampa Bay Rays over just four years. It all started back here at Cape High, where he was able to find and unleash his true potential, catching the eyes of scouts from all over the country.

“He was one of the best pitchers I’ve ever coached,” said Michael Gordon, head baseball coach at Cape High. “He was always a good pitcher, good mechanics. When his body developed, he just got better.”

As he grew, he began to throw harder and harder, with his velocity reaching over 90 mph by his senior year. Today, that number frequently hits triple digits. Scouts began to rave over his raw ability.  “This natural arm talent combined with great competitiveness yields the potential to grow into an impactful major league pitcher,” said Rays scouting director Rob Metzler.

Although he was drafted straight out of Cape High back in 2016, going all the way back in the 26th round by the New York Mets, he decided to go down a different path. “I didn’t think I was ready out of high school. I was young; I was really immature,” McClanahan said. “I knew I had a lot more in the tank.” He ended up electing to stay in Florida and attend USF.

Unfortunately for McClanahan, his first year at USF was spent watching from the dugout, as he needed surgery on his throwing arm and missed nearly the entire year. Rather than letting the disappointment of losing an entire season simmer, he took it as an opportunity for growth.

“I think I learned more that year of sitting out than I have been probably my 18 previous years of playing the game,” said McClanahan. Throughout his career, he never let himself get tied down in negatives, and always kept his head up, knowing that a minor setback would result in a major comeback.

“He always had a great character,” said Gorton. “He was a quiet shy kid, but on that mound – it was you vs him – and you can bet he’s not going to let you win. His competitive nature is through the roof.”

He bounced back, finishing his college career strong and being drafted again- this time in the first round by the Tampa Bay Rays. He shot through their minor league system, working hard and staying focused on the ultimate goal: reaching the MLB and blossoming into a star.

He was able to work his way out of the inning, and as he walked off the mound after wrapping up a historical outing- becoming the first pitcher in MLB history to debut in the playoffs- he knew it was not the end of the long and winding journey he had taken to reach that point. It was merely the beginning.