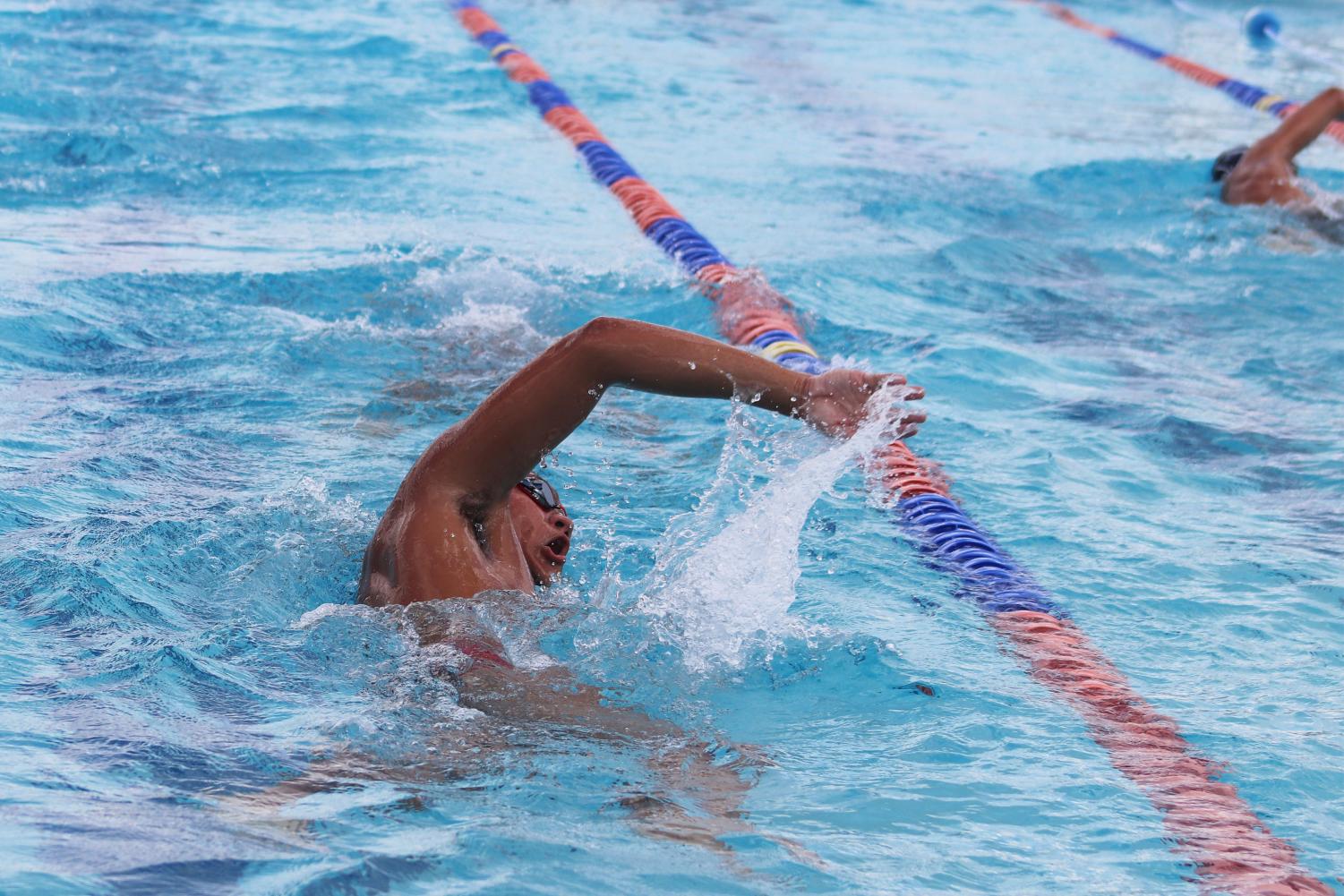 Kelvin Manzano practices his freestyle while also remaining a safe distance from his peers. (Lei Garcia)

Kelvin Manzano practices his freestyle while also remaining a safe distance from his peers.

The swim team continues its legacy

Early in the morning, while most Cape Coral residents are sound asleep in their beds, the alarms of 15 students simultaneously ring as the clock strikes four am. With tired eyes and aching muscles, Cape High’s swim team members rush out their doors and head to the pool.

By 4:30, with swim caps and goggles on, they line the deck, ready to begin their morning practice before a long day of school.

By 5:00, the coaches call out to their team, motivating them by saying “Get comfortable being uncomfortable” and “The faster you go, the more of a break for breathing you’ll get.”

And by 6:30, team members wash the chlorine out of their hair and remind each other that the sets they worked incredibly hard on for the past two hours will build character.

“A lot of these kids are up super early and they get to practice. They get ready, eat on the go, and then they go to school all day,” stated Kirsten Tedhams who has been a swim coach at Cape High for four years. “Typically, most of them will practice at least two hours after school. And then, head home, make sure they’re doing their work, go to bed, and do it all over.”

The team has worked out formalities and is able to compete amidst the pandemic, but the effects of COVID-19 still remain.

“Before the break, I always had this really bad problem with bending my arm in my backstroke. I was able to fix it before we went on break and actually started getting up to some of the higher level times,” claimed sophomore Alexander Rodriguez who has been swimming for 10 years.  “When that break hit, I wasn’t able to practice my backstroke. And then, I came back to swimming and my bent arm came right back.”

In addition to minor technique and performance challenges, the whole structure of practices and meets has had to adapt.

“Normally we have anywhere from 12 to 15 meets depending on the season,” stated Coach Dianne Kimble. “This season we’ve only had four because of the pandemic.”

The swimmers are also not letting this setback defeat them this season, and are looking forward to more wins this year.

“The kids have done really well in terms of you know doing what we need them to do and taking care of everything that we need in order to make sure that we can have a season,” said Kimble. “The fact that they’re here working as hard as they are given the pandemic and all the things that could have gone wrong, this season is testament to their dedication.”

As one of CCHS’s most successful athletic programs, the swim team works tirelessly to train and compete during the fall.

In the 2019-2020 school year, the boys won first place at the Lee County Athletic Conference (LCAC), districts, and regionals. The girls team, also beating out most of the competition, placed second at LCAC and districts.

Both teams have a very successful winning streak, but these victories have not come easy.

“You don’t look forward to [practice] because of the hard sets, but after you get in the water and you practice, you feel good about it,” said senior and second year swim member, Kalvin Manzano. “You’re thankful that you have your coaches to push you.”

Kimble has been leading the swim team to success since 2002, and has shown her dedication time and time again.

“I will continue coaching until I die,” Kimble joked. “Until they dig my grave on the pool deck. Bury me in chlorine.”

She works closely with her second family every day to ensure their triumphs, no matter the obstacle.

“We weren’t even supposed to be swimming and they somehow made it possible because they went through all their efforts to get us into the water, with all the safety precautions,” said Manzano.

The love for Kimble and Tedhams is widespread throughout the team, and contributes to their overall success.

“I love the coaches. Yes, they discipline us and make us work hard, but the more we work hard, the more we’ll improve in the future,” stated junior Natalie Handzlik.

All in all, the team doesn’t just focus on swimming, winning, and titles. What makes the group so unique is their family-like atmosphere that radiates no matter what.

Whether it be on deck for practices, at away meets, or sitting in the media center working on homework before a meet, everyone is always there for each other.

“After meets on Saturdays, we would normally go out to like Perkins or Chick fil a,” said Rodriguez.

With the pandemic, those normal game day rituals may have changed, but the spirit is still alive. “During study hall the upperclassmen are available to help out the underclassmen with any homework questions they have,” stated junior Dana Lara, who has been swimming for 11 years. “We make sure to keep each other motivated and encourage people that are falling behind.”

Even for new members, the feeling of inclusion is always there.  “I had not swam before, and when I did join the swim team, the coaches made me feel like I was a part of the family,” said Manzano. “I got accustomed to the team very quickly and it was really fun because they made me feel right at home.”

The ability to mesh so well as a team and as a family sets Cape High Swimming apart from many other schools and is engraved as part of their winning mentality.

The swim team has a legacy to uphold, a legacy of inclusion and success. From any viewpoint, it is obvious that this dynamic will continue for years to come.