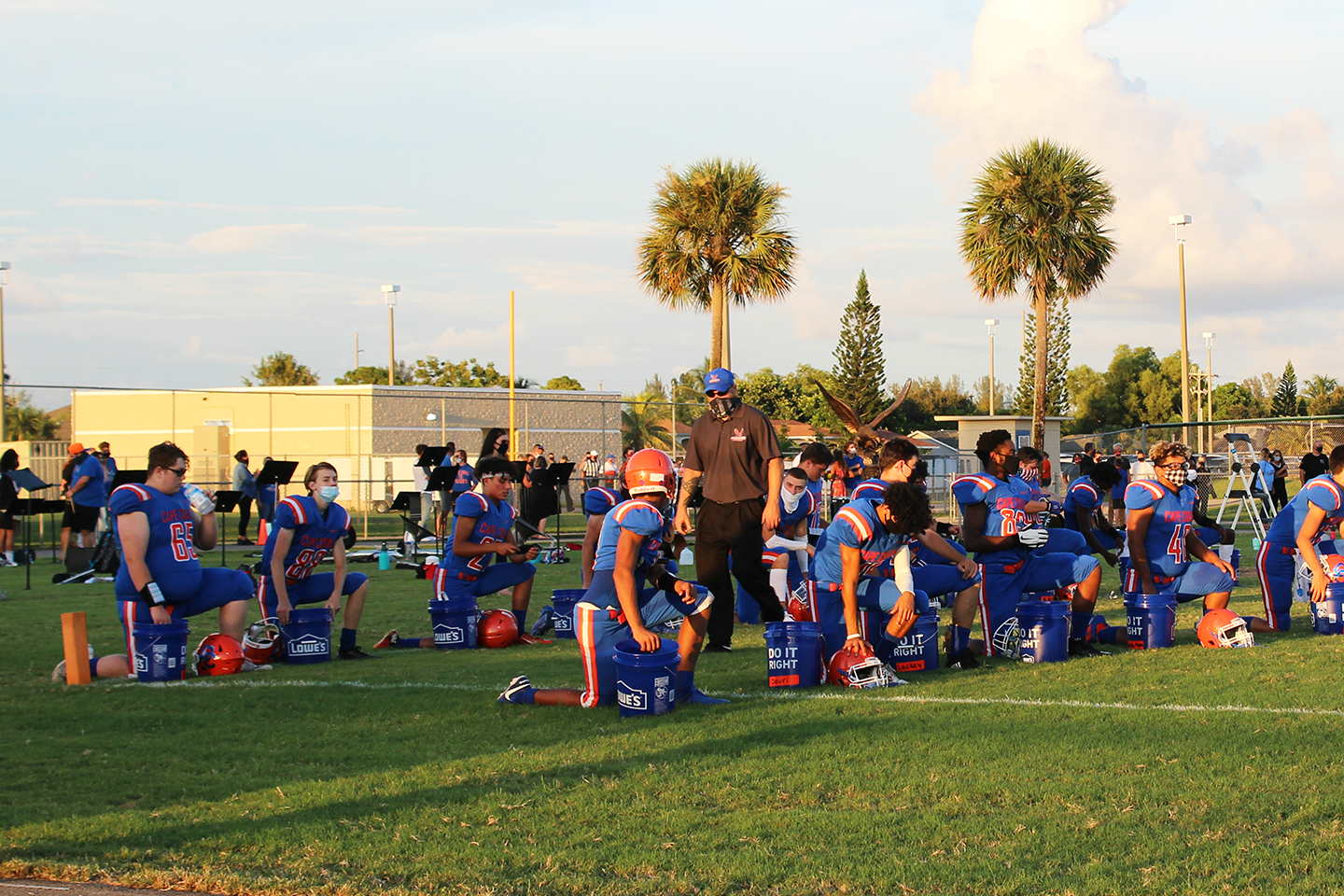 Cape High football players wear masks and carry buckets for their water bottles to be safely distanced during their September 25th game.

The new world of sports under a pandemic

As most professional sports leagues make their return to play, albeit, with limited fans and forced adherence to strict safety protocols, hundreds of thousands of high school athletes have been waiting in the wings. They have been anticipating the day that they, too, can take the field and return to the sports they love.

Despite much conflict and controversy along the way, high school sports have finally returned to play in Florida. After many meetings held by the Florida High School State Athletic Association (FHSAA), there is finally a sense of clarity over the direction the heavily anticipated fall sports will be taking this year.

The FHSAA proposed three unique options for returning to sports: continuing as close to a normal season as possible, eliminating the state series and keeping competition local, or pushing back all seasons until December. Feedback from multiple committees suggested the third option would be the safest, fairest choice and the Board of Directors unanimously voted to enact it after hours of elaboration. That decision lasted less than a week.

The public responded with outrage. Over 40,000 people signed petitions or posted on social media using hashtags like #letthemplay in an attempt to convince the committee to reconvene, this time with the public opinion taken into account. Governor Ron Desantis and Senator Marco Rubio had also stepped forth and endorsed Option 1.

Feeling pressured by all of the clamoring, the Board of Directors held an emergency meeting, in which they overturned their previous decision in an 11-5 vote to implement Option 1 instead. Worth noting is that all fourteen members of the Sports Medicine Committee stayed consistent with their vote for Option 3, while the other individual sport, student, and athletic director committees were split between the other two.

Voting to bring sports back and actually bringing them back, however, are two different matters altogether. With much unknown about the risk of Coronavirus in sports, many districts are struggling to draw the line between a safe experience for their athletes, and a quality one.

Chris Patricca, a Lee County school board, and FHSAA Board member has expressed her disapproval with restarting sports, and even returning to school in-person. “I don’t know how we do this and protect kids, and protect the opportunity to have any kind of a season,” Patricca said.

There is no set formula for the 74 different school districts to follow; each of them has been placed in charge of deciding the extent of which athletics can return in their schools, meaning more COVID-prevalent districts like Miami-Dade, and lesser ones, like Polk, are going to have near polar-opposite responses to the FHSAA vote.

The Lee County School District has been navigating through this slowly and meticulously, as the whole county is watching to see if COVID-19 numbers rise with the reopening of schools. Official practice for low risk sports (Cross Country, Golf, Bowling) began August 24, while high risk sports (volleyball, football) followed on the 31st.  Unofficial practice, however, began back in July.

Each sport was met with varying restrictions to prevent any potential spread of the virus, but some universal ones have consisted of six feet of spacing when possible, masks on at all times when not actively practicing, and not sharing equipment.

Thus far, there have been no major breakouts, and the focus has shifted from safety protocols to resuming competitions with limited spectators.

The first major competition for any fall sports in the area was the Fort Myers Invite, which happened back on Friday, September 4th, at the Kelly Road Soccer Complex. All attendees were required to wear a mask while on the property, with the only exception being the athletes while racing. Spectators were limited to two per runner.

Volleyball and football followed nearly a week later, with both maintaining the two spectator cap per athlete, and football games maxing out at 25% capacity past that. There have been no official spectator limits for any other fall sports so far, as most of these decisions will be made on a case to case basis.

The late start to sports this year means that the state series is fast approaching, and while there are plans in place for each sport, it is unsure whether these will remain the same or shift as COVID cases fluctuate. As of right now, state competition will be happening in a diminished form, with fewer qualifiers for individual sports, the event being spread out over more days, and the waiving of playoff requirements.

Senior Diver Phaedra Jalenowski has mixed emotions on the adjustments made to fall sports, and the implications they may have on her final season. “I think that everyone is doing everything they can to make this year the best it can be. It’s extremely unfortunate that this has to happen my senior year, especially since I wanted this year to be my best year to make up for past failures, especially at state competitions,” she said, “but hopefully we can still make the most of what we’ve been given.”