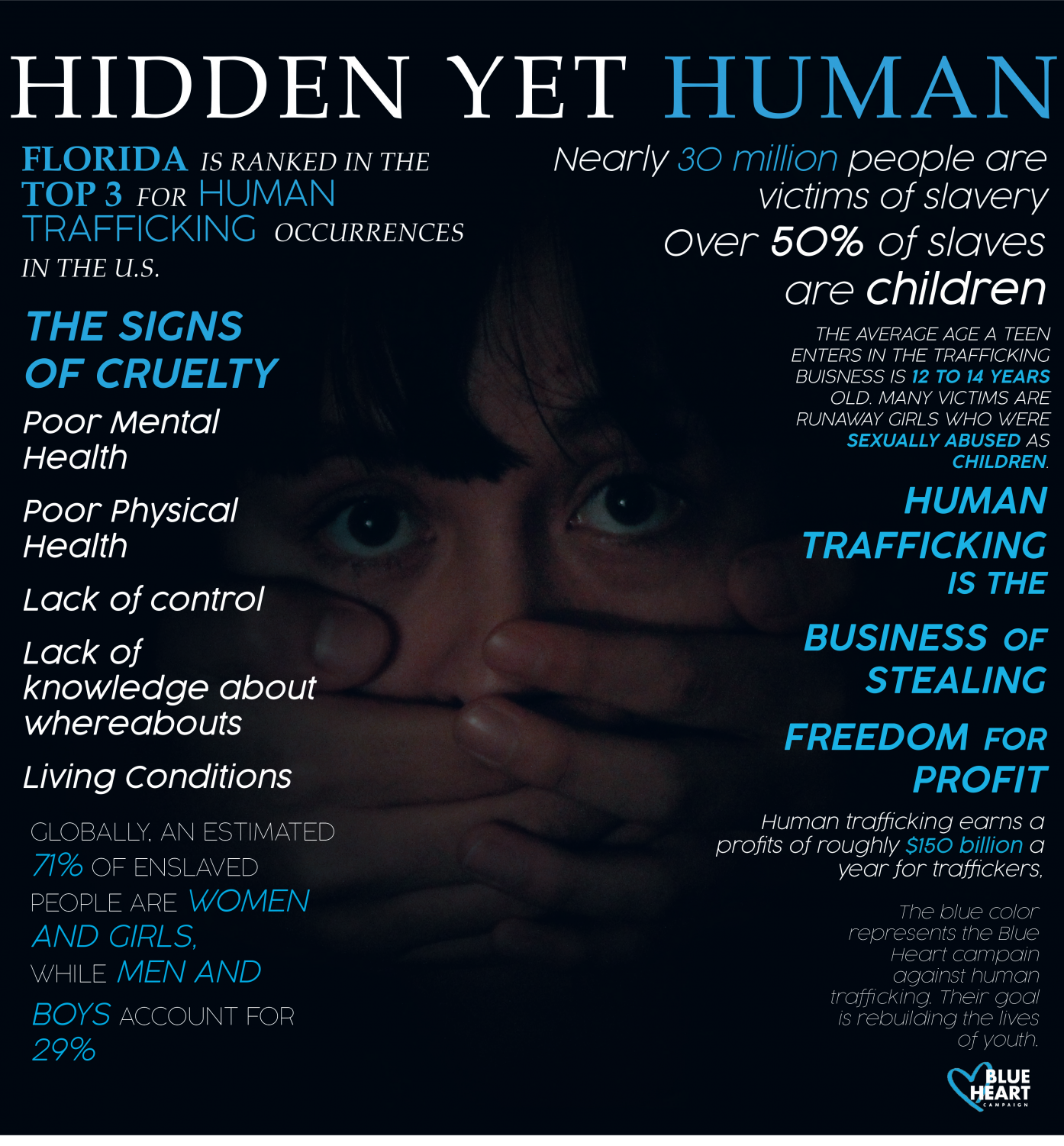 Lynn Brewer, President of the Florida Coalition Against Human Trafficking, steps into the silent room. She clasps her hand tightly around the sturdy strap of the unadorned backpack, a vibrant array of personal hygiene items line the thick plastic walls of the bag.

The survivor fiddles with her thumbs as Brewer enters the room, her eyes widening when she spots the simple backpack. As she begins to pull items out of the bag, her delicate body recoils in pure astonishment.

“She was going through it and it was amazing. She kept saying ‘This is mine, this is mine,’” said Brewer.

She gently lifts a toothbrush out of the bag, her face scrunching in confusion.

“She goes ‘But who else has to share it with me?’”

Brewer’s eyes begin to sting, her face becomes heated by a blazing hatred for human traffickers as desperate tears run down her
cheek.

“That did it for me. I walked out of the room crying and said I don’t care what it takes. All my time is going to trying to expose these human traffickers and trying to keep our children safe,” said Brewer.

Students in Cape Coral are at a high risk of being exposed to traffickers with cases involving high school students occurring yearly and going unreported. “We rescued and brought back across the Alligator Alley a young gentleman and his younger brother and their grandfather was trafficking them. That was a Cape Coral case, but you can’t put a lot of this in print. It’s actually against the law, they’re minors,” said Brewer.

“Teenagers are the most at risk for this because they’re young, they don’t know how to talk about it, or they don’t always know their own rights. We find out all the time that traffickers will hang out around schools,” said art coordinator HTAP, Savanna Martensen. Often the trafficker will find a teenager who is lonely or may be having familial issues to take advantage of their need for companionship.

“Individuals will go out of their way to befriend somebody and fill that need so that way, they’re that person that is most relied upon by that person,” said Martensen.

“They use these tactics to the point until these individuals, the teenagers will only want their attention, will only want to be around this person. Until they flip the switch, and then suddenly, you have to pay them back for all the things that they did for you, all the money that they spent on you, or all of the love that they’ve given you, you have to give that back somehow.”

Unfortunately, once a teenager is trapped in this situation they often believe they have no choice but to follow the trafficker’s demands. “And then suddenly, you’re in a trafficking situation, you have to pay them back,” said Martensen.

“So you have to pay them back by selling your own body, and you have no choice. Well, at least you don’t think so. And that’s what we try to spread that awareness because we want people to understand they have a choice, that they’re not committing a crime.”

Victims of human trafficking can show signs of poor mental health, anxiousness, paranoia, physical abuse, or depression. However, most of the time they are afraid to speak up about their situation or are confused thus it’s important to be mindful and nonjudgemental of their situation. “These people do not self identify, they do not walk up to somebody and say ‘I’m being human
trafficked’ because there’s either a horrific, result from that, or they’re taught not to trust anybody,” said Brewer.

Programs such as Artreach under HTAP work to educate others about trafficking through art and aid those that have been trafficked by allowing them to express themselves through art. “What we do is educate what human trafficking is and then after a presentation and discussion of what it is we have, whoever we’re teaching that moment, we have them translate what they learned into either a painting or a piece of artwork,” said Martensen.

At one of Martensen’s art reaches, she worked with a confident, kind 18-year-old teenager who’s art left Martensen starstruck. “It had a person with her back turned in the chair, giving out tickets to these individuals that were in the shape of plugs and then they would pay for the tickets so they could plug themselves into a person that was shaped like an outlet and it was very interesting,” said Martensen.

Martensen later discovered the young artist had been trafficked by her mother at the age of 5 for less than $20. “It was a moment for me that I realized that just spreading this awareness, we are able to start this conversation and create a movement and the more people know about it, the more people feel, you know, empowered by their own knowledge by it,” said Martensen.

Education and awareness have become a crucial piece to the human trafficking conversation. More and more organizations are working to educate students, but also educators.

The School District of Lee County works to educate and train Student Services while also offering the training to teachers and administrators. They also create and promote awareness flyers. “Our goal is prevention and education of our students and our staff and providing and connecting community resources that are available to our schools and our students as best as we can,” said Lynn.

Students can create change by simply showing kindness. “They just need to tell them that they have other options because the reality is that these people that become victims are at risk for a multitude of reasons. If you’d be friends with these individuals or just tried to be a kinder person, you could possibly fill that need better than a trafficker could so that way they aren’t put in that situation,” said Martensen.

Brewer wipes her tears and prepares herself to reenter the room. She slowly turns the knob of the door, her eyes glued to the ground as she walks into the room. When she finally gathers enough courage to look at the survivor, her heart is warmed by the tremendous smile plastered on the girl’s face.

Text HELP to 233733 (BEFREE): To get help for victims and survivors of human trafficking or to connect with local services.