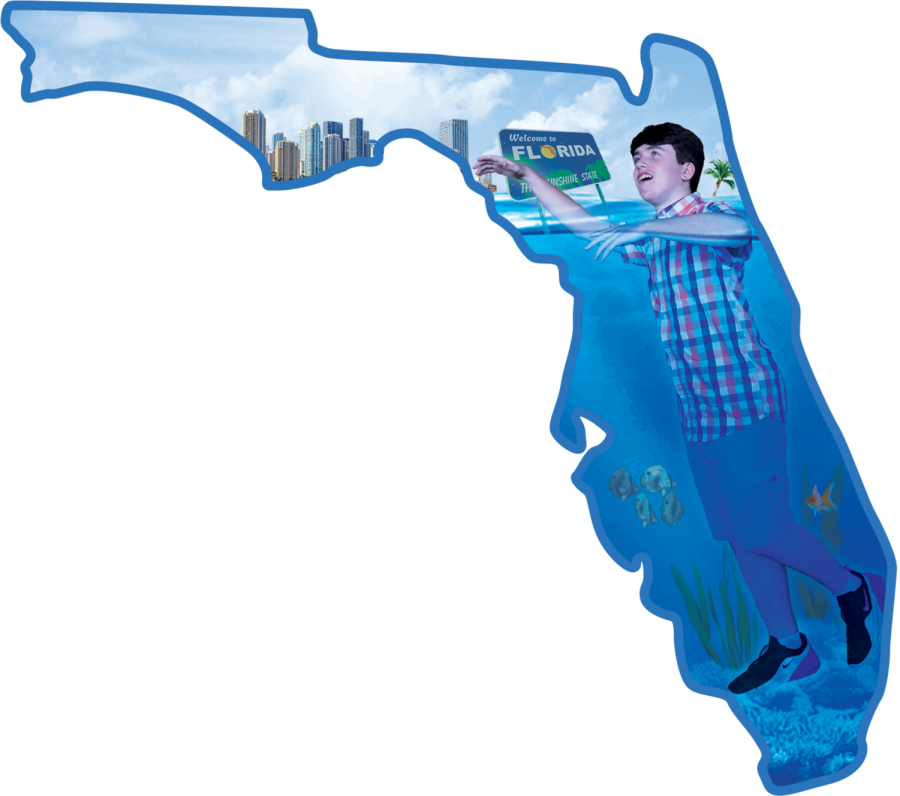 Joseph Brady is depicted trying to swim in a submerged Florida.

A cosmopolitan city of wonder alive with the rich culture of the past rests beneath the idle waves of the Atlantic. No, it is not Atlantis; it is Miami, or else it will be if the state of Earth’s climate continues to decline.

Based on current trends, it is expected that sea levels will rise up to six feet over the next 80 years according to U.S. National Climate Assessment. These few feet may not seem detrimental to a majority of the globe resting comfortably above sea level, but for the half-million people living a mere six feet above sea level in Miami, there is a large cause for concern. Florida is quite literally treading in dangerous waters.

Fueled by carbon emissions, little public knowledge, and lack of government funding, irreversible damage has been done to the one and only habitable place humans have according to the United Nations report, “The Social Dimensions of Climate Change”.

It is no secret that the Earth has naturally been heating up for thousands of years now as a part of its natural cycle. However, the rate in which it has been doing so has recently spiked, and sea levels followed suit as they began increasing faster than they have in over 6,000 years.

This is attributed to the melting of the world’s ice from glaciers and mountains, which accounts for two-thirds of the elevated water levels. The remainder of this is fulfilled by the thermal expansion of water as the Earth’s temperature heats up since warm water occupies more space than its colder counterpart.

Florida specifically has already seen some of the effects firsthand as storms become more common and the accompanying storm surges more impactful. Long term resident of Miami Bob Stanley has already noticed some of the minor changes foreshadowing a soggy future. “We live near a park on Biscayne Bay, and the walking trials floods much more than it used to,” said Stanley. “It (flooding) could make traffic even worse, lower property values, or even
be a safety hazard.”

This peninsula is on the radar of environmentalists for more than just its low altitude. Florida lies on a bed of limestone, which is extremely susceptible to water erosion, making the fresh water supply at high risk of salt water infiltration. Miami is also already exposed to King Tides that cause periodic flooding and serves as a reminder of what is to come.

Executive Director of Development for the University of Miami Ileana Daly-Bronstein has personally become very aware of the threat looming around the corner. Bronstein noted that the marine biology campus on the beach is at risk. “The Rosenstiel School of Marine and Atmospheric Science is a large institution, and it would definitely be impacted by flood levels. They would probably have to relocate and would need a space large enough to house their facility,” she said.

At first glance, it appears the water level itself is the main complication; however, there are many hidden issues that result in more devastation.

With more saltwater pouring into Florida, the unusual salinity balance required to sustain the diverse ecosystems of the Everglades are being disrupted. This shift from brackish to saltwater would lead to the endangerment of many organisms including seagrasses and wading birds while forcing others to adopt or relocate, completely changing the iconic landscape of the state.

Erosion is yet another obstacle, and the correlation between this and rising water is undeniably apparent. The Surfrider Foundation gave Florida a ‘D’ rating on its efforts to decelerate erosion rates, coercing Governor Ron Desantis to put aside $2.5 billion in an attempt to restore Florida’s natural coastline. They also say curbing its effects is one of the first steps that must be taken when dealing with this crisis, and Florida is already failing to meet the standards necessary to protect the coasts.

Lori Shaw, Cape High’s International Baccalaureate Environmental teacher, said, “It’s not the rising water levels, per se; that’s the biggest problem that we’re facing. It is the problem of climate change, and those activities that we do that are putting CO2 and CH4 methane into the atmosphere.”

There is much more at stake than solely salt and soil; Miami is in danger of submerging underwater, leading to the decimation of its current culture and dynamic. Flooding would first strike Miami Beach and force its residents to abandon their properties in search of higher ground. This mass migration of people would raise the price of real estate in areas with higher altitude like Little Haiti, which traditionally houses low-income residents who may now be unable to meet the price demand.

Junior Rachel Fernandez lived in Miami for a short period of six months after fleeing Cuba with several family members, many of whom still reside in the 305. Fernandez, who worries for their safety, especially in hurricane season, said, “If the damage from flooding gets bad enough, they will finally realize they should move.”

Climate change could wash away future generations losing the ability to experience a city thriving with diversity and an environment unique to Florida.

The most clear cut solution is to build a barrier between the imposing water and land, which can be implemented in one of two ways. The Smithsonian and Sea Level Rise.Org have looked into the many possible answers to the issue. One of these being barriers which naturally be implemented to absorb salt and defer water, such as in Palm Beach County, where 70 acres and $17 million have been devoted to planting mangroves, oyster reefs, and seagrass fields. The other method, already familiar with many Americans is building a wall.

This would change the structure of cities that are directly on the water and this could be key in protecting the 760 million coastal residents found around the world. Miami has developed an extensive water pump system to get floodwater out of the city quicker while other metropolitan areas are putting irrigation systems into place.

On their sites, they also state that more drastic prevention measures may even have to be utilized, including the reorientation of the physical layout of coastal urban areas to put platform and high rise buildings closer to beach fronts due to their ability to withstand frequent flooding. Miami is also accommodating their lack of altitude by raising roads up to two feet to avoid water seepage.

It may seem impossible for the average citizen to get involved when such serious actions are being taken but Shaw assures that there are ways for students to do their part. She suggests that as a community Florida must become more green. Shaw said, “If we ate more plant-based diets, we grew more food, we grew more trees and shrubs that are native, we would promote biodiversity. We would decrease the effects of carbon dioxide in the atmosphere and as a result of that, we could minimize the effects of climate change.”