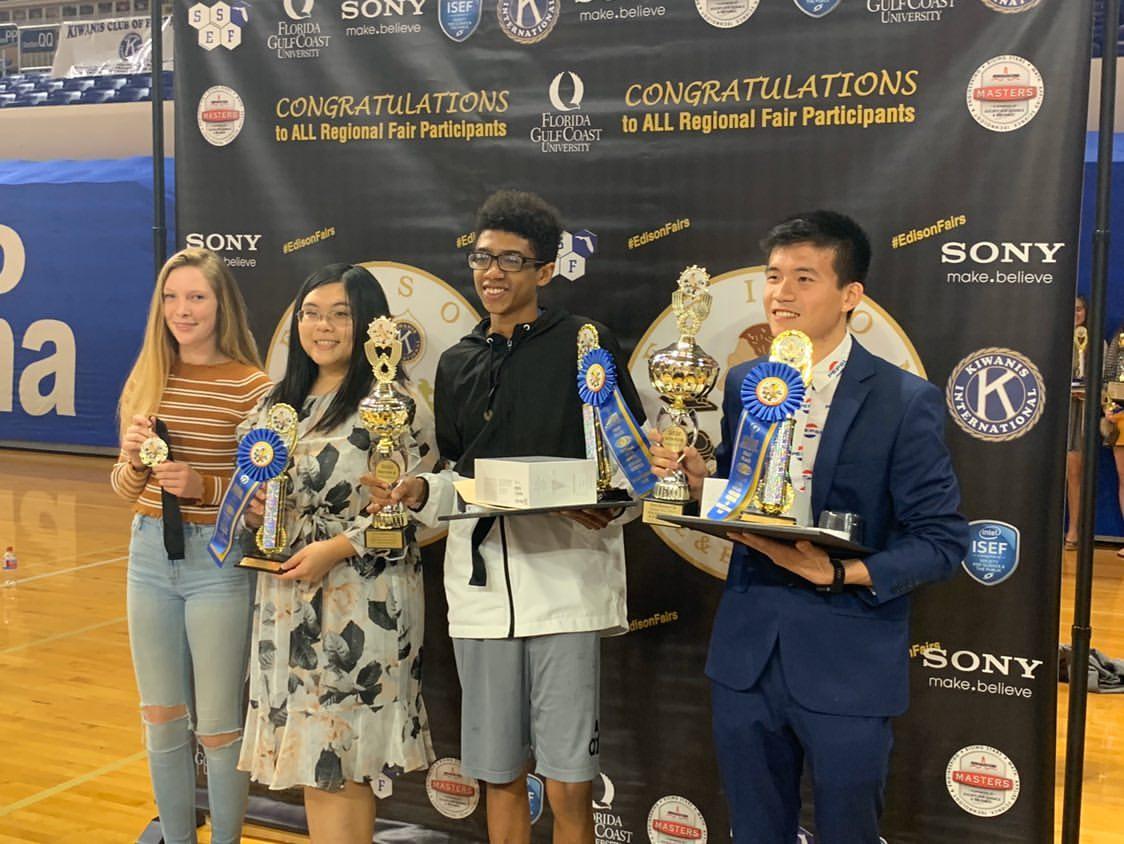 Students received their awards during the ceremony. (Courtesy of Zhoucai Ni)

Students received their awards during the ceremony.

At the regional fair, competitors presented their prestigious projects in hopes of advancing the State Science and Engineering Fair (SSEF) of Florida held in Lakeland from March 24-26.

Romano was able to impress the judges at regionals and received an honorable mention award in Animal Sciences.

Jiang’s project won first place in the Environmental Sciences category, qualifying her to present at SSEF.

“Another student in my category who had previously won first place for three years in a row and competed at the international level won honorable mention. I was so surprised I thought that if he won honorable mention, there was definitely no hope for me,” Jiang stated.

“When they reached first place, they called out my name. Shocked, I jumped up and ran on stage almost tripping on the stairs,” Jiang recalled.

What they didn’t expect was to not only qualify for SSEF, but they also were chosen to compete at the International Science and Engineering Fair (ISEF) in Anaheim, California in May, and won first runner up for Best of Fair, a shock for both of them.

“When we went to states, they started announcing the grand winners of the fair and who’s going to the international one and I was like ‘Okay, let’s go home now’ and then they called our name,” Ni said in disbelief.

Ni and Edwards collaborated on a project in the Machine Robotics category focused on software for animal shelters that could predict the future of an animal based on their characteristics.

“It’s a machine-learning algorithm software that uses logical data to predict an outcome for shelter animals. My data set had about 26,000 different animals that were gathered from a shelter in Austin, Texas. I used different features like gender, age, breed, color, and other stuff to put into a decision tree that uses that data and finds a trend in that data to predict an outcome,“ Ni said.

This software could “tell you what it [the animal] has the highest chance of getting transferred, adopted, or euthanized. So the shelter can then use that information to better distribute their resources,” Ni said.

Jiang’s project was focused on the effects of medications on the environment.

“I remembered learning about different medications and their side effects during pharmacy class. Then I started to wonder: what happens to these medications when they get into our water system and what effects do they have on our environment?” Jiang said.

Fueled by her passion for learning, she spent many days collecting water samples out in the field to extract chemicals. “I enjoyed every second spent in the lab because I knew I was contributing to a greater cause: the preservation of our planet’s future,” she said.

Similarly, Ni’s passion for computer science led him to this monumental achievement. “The thing I like about CS (computer science) is that it can be applied to a lot of things. It’s very universal; the main principle of computer science is problem-solving, and I really enjoy that.”

His ambition for CS even led him to create a Computer Science club at Cape High that meets every Monday in math teacher Miguel Torres’s room.

Ni is the president, and Edwards is on the board for the club.