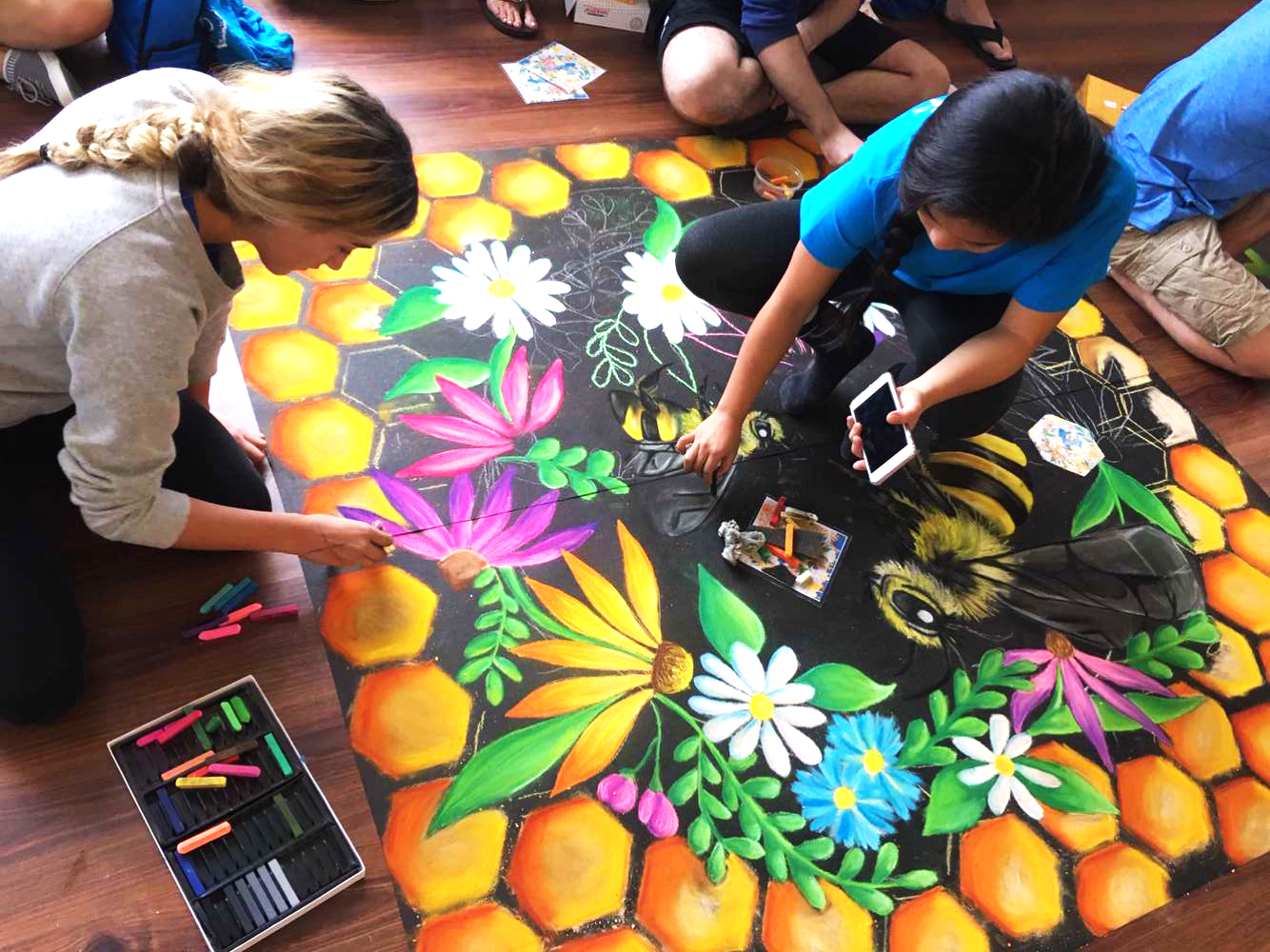 Chalking Up the Block: Sedona Scott and Celine Galang work on their chalk painting, along with Luke Ingraham and won first place. (Courtesy of Luke Ingraham)

Chalking Up the Block: Sedona Scott and Celine Galang work on their chalk painting, along with Luke Ingraham and won first place.

When people hear about sidewalk chalk, the words typically evoke a quaint, nostalgic reminder of childhood, scenes of stick figure families and late-summer scrawls on driveways. What most people do not associate it with is award-winning, artistic masterpieces.

Seniors Sedona Scott, Luke Ingraham, and Celine Galang, however, are not most people. As part of the annual Fort Myers Art Fest, the three competed in the Chalk Block art competition, using sidewalk chalk to fill a 6 by 6 square with color. When the scratching stopped and the dust settled, their enchanting scene of honey bees and flowers won them first place out of over forty entries.

Scott is a veteran of the Chalk Block contest, having competed in the event for 2 years prior to this one.  “Our art came out better than I could have imagined. I wasn’t expecting to win first, so I was ecstatic when my team pulled off the win,” she said.

For Ingraham, on the other hand the experience was a step into completely new territory. “I was a little nervous going into the competition because it was my first time competing in chalk block, while my other teammates have competed before,” he said.

The theme for this year’s Chalk Block was ‘Better Together,’ which produced various entries full of frolicking animals and people with their family and friends. For their entry, however, Scott and her team decided to focus on a much more unique, fundamental partnership. “Bees and flowers were the main focus of our art. The theme was “Better Together, so we wanted to do something that is as dependent on each other they are.”

While winning the grand prize is the goal of any competitor, for the teams at Chalk Block the value of the contest is deeper than a mere ribbon. “I definitely learned about teamwork, and I learned not to compare myself to others,” said Junior Simona Girdvainyte, whose team also competed. Though they may not have won a prize, she’s glad for the opportunity. “Having fun with my friends and trying out new things was really what the whole event was about,” she said.

Ingraham too believes that Chalk Block and Art Fest are valuable experiences for artists and non-artists alike. “I think events like this one are important to the community because they can show how creative and inspire you to create art. They can teach you new things about art that can be applied to so many things in life.”

Girdvainyte hopes that the talent displayed in the competition will inspire artists around the school and community to broaden their own horizons. “I think it’s important to branch out and get out of your comfort zone, try new styles, subjects and mediums,” she said.

Encouraging aspiring artists to showcase their skills is something Scott feels is especially important. “The advice I have for students looking to pursue art is to put your works out there in the community as much as possible. Exposure is so important because art allows you to bring joy to others and spread messages that can have an emotional impact,” she said.